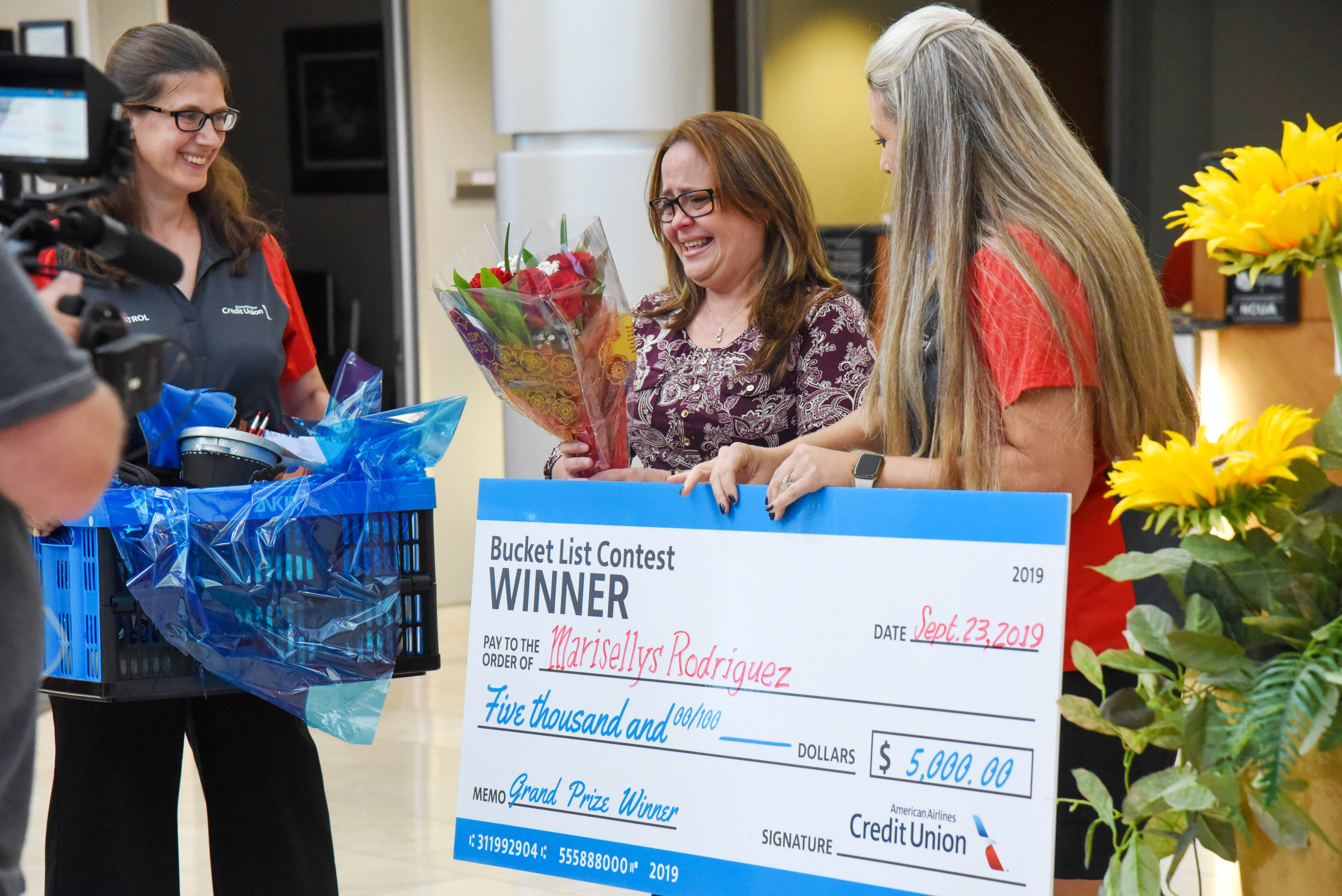 Answers ran the gamut from functional to fantastical, with more than 450 members sharing their list items hoping for the chance to win $100. Three members did receive $100, but no one knew the Credit Union had something else in mind for a lucky few.

For the second year in a row, the Credit Union Prize Patrol stepped things up a notch, this time awarding five randomly selected members with $5,000 to help check items off their bucket list.

Our first winner was Elizebeth Brooks, a Senior Analyst for Ramp Policies and Procedures at American Airlines and an 8-year Credit Union member. Her bucket list item was a trip to Sicily. Working with her boss and coworkers, the Prize Patrol surprised Elizebeth during a phony team meeting at the new Skyview 8 building.

We caught our next two Texas-based winners off guard by asking them to stop by our headquarters branch to collect their $100 prize. Marisellys Rodriguez, a Credit Union member for 22 years, told us a Caribbean cruise and the chance to retire and take care of her grandchildren was on her bucket list. So while accepting her $100 on camera, she was shocked to learn she was actually receiving $5,000. There were plenty of cheers and tears as members in the lobby of our Flagship branch applauded for her unexpected windfall.

Glenn Knight, a 30-year member who wanted to surprise his wife with a trip to Istanbul, got a surprise of his own while filling out paperwork in our boardroom. While signing off for his supposed $100, he was taken aback when he heard it was actually a $5,000 deposit being made to his account.

The staff at our Chicago branch surprised ORD Customer Service Agent Rosemarie Arambula, who had just returned from a few days off from work, with the news that she had won $5,000 to put toward her bucket list item of going on a European cruise.

And finally, Randall Dietz of Inkster, Michigan, was reluctant to return calls from the Prize Patrol. But he was delighted once he finally did to learn that he’d be receiving $5,000 to help fund his passion to visit all of the Smithsonian Institution locations.

Each winner also received a themed gift basket focusing around their bucket list wish. You can follow the antics of the Prize Patrol on our social media channels and watch video of Elizebeth, Marisellys and Glenn being surprised, with more to follow.

Keep a look out for more ways to participate with the Credit Union in 2020. You never know where the Prize Patrol may show up next!