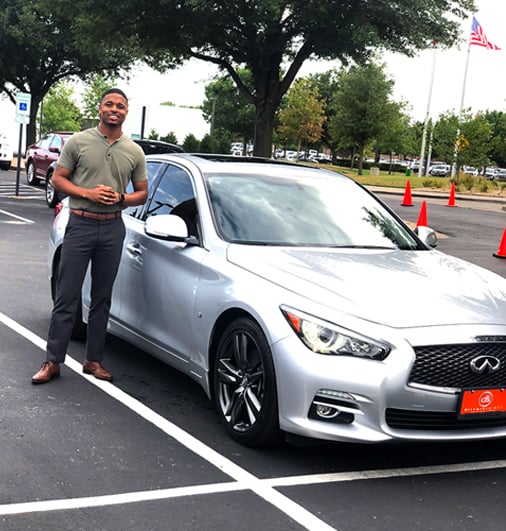 For 28-year-old Darryl, his journey with American Airlines Federal Credit Union began a little over a year ago when he stopped by our Flight Academy branch to find out what all the fuss was about.

“I spoke to many colleagues about the benefits of a Credit Union,” he said about his first visit. “The level of customer service that I received let me know everything that I needed to know: I was in good hands. I went in to initially ask a question about the pros and cons and left as a member of the Credit Union family.”

It didn’t take long for Darryl to take his first big step: Financing the car of his dreams. “The day that I visited for questions was the same day that I inquired about the auto financing,” Darryl said. “I was pre-approved and the following day I found the car I wanted! As a first-time car buyer I felt all of the emotions but with the support of the Credit Union team, the process was not as overbearing as I anticipated it to be.” Darryl was quick to point out what a milestone that decision was for him.

“Having a car financed was a huge step for me personally,” he explained. “It was a goal of mine, but I hadn’t expected to reach that goal as soon as I did.”

Darryl said he was so impressed by the customer service he received that he reached out to each team member who helped to thank them personally. His positive experience has since transformed him into a genuine Credit Union advocate.

“If someone were to ask me if they should become a member, I would tell them run to the nearest American Airlines Credit Union as soon as possible!” he said. “I’d share the excitement that I feel each time I walk into any branch because I know there’s going to be an authentic encounter and I will be walking away with a smile. You don’t find that everywhere.”